This text comes from the catalogue dedicated to the "I hate contemporary jewellery" exhibition, which took place in Melbourne on August-September, 2018. Questions prepared by Anna Gray.

Where did your idea to make this work come from (was there a particular story behind the idea)? Everybody has got their own heritage, which forms one's identity and conditions the personality to a certain extent. I am not an exclusion from this rule. While living abroad and acquiring new experiences my identity is enriched by new facets, but I do carry a touch of my Ukrainian heritage as well. I have been making thoughts about the reasons for what is happening in Ukraine since the beginning of the Ukrainian-Russian war in 2014, trying to find an explanation. I came to the conclusion that the mindset of its citizens has a significant impact on the country´s development. A mindset, that is unfortunately strongly influenced by sovietization, a process aimed at creating a new kind of a human called "homo sovieticus". The Soviet Union has fallen, but such individuals influenced by patterns of sovietization techniques still exist. Oddly, traits of those can be found not only in older people, born and brought up in the empire of evil, but also the younger generation often happens to be "infected". I asked myself why could it happen?

At the same time I stumbled upon a research on psychology of post-genocide societies, stating that the genocide effects last up to four generations, and a study on Holocaust survivors, proving that the trauma is passed on to children genes. Regardless of the juridical status of the Ukrainian famine of 1932-1933, it must have had similar impact on generations of people; it must have also played a significant role in the sovietization of Ukrainians and the arising of the collective "homo sovieticus". I found that these studies explain a lot. And one also should add to it war communism of the early 20-ies, the repressions of the 30-ies, World War II, the famine of the 1947 and the other crimes against humanity committed by the communists to get the whole picture.

The idea of unfavourable socially conditioned heritage passed from one generation to another led me to the creation of "Homo sovieticus". Later on I decided to continue this series by expanding it on other examples of social patterns conditioning human self, so "Homo digitalis" emerged. And I think there is still potential to carry on, so I guess "Les fleurs du mal" will soon grow. Do you know any homo sovietucus or homo digitalis? Let me picture a scene from our everyday life. When you live in a big city, you go to work/school, you enter subway. Look at the people on the stairs or people sitting on the metro. What do they do? They are attached to their smartphones: surfing the Internet, checking messages, changing statuses in social networks, reading their daily newspaper, maybe booking a hotel for a week off or buying shares at the electronic stock exchange etc. Digital revolution creates opportunities, but it also comes at a price as people seem to be more alienated from each other than ever before. Of two existing worlds - the real and the digital one - we get more and more involved in the latter and as follows more dependent on it; living everywhere we truly live nowhere. Recent studies prove digital activities have an impact on our mental health. For example, the continuous state of comparing yourself with the others leads to anxiety and psychological problems. Every next generation is more "fluent" in digital media, but the extent to which our mental health is modified by it increases as well.

When it comes to homo sovieticus, it is a rather common species in post-soviet countries. One can meet them everywhere, even in the nearest neighbourhood. Actually, my mom has accidentally talked to one of them while doing sport recently. The elder gentleman turned out to be a fan of Stalin and was horrified that my mom was not! Such extreme examples are not so common. However, they do exist. If we look at the broader picture, we notice that the virus of distrust, fears, lack of initiative, giving priority to survival rather than something else, conformism, constant anxiety has penetrated almost everybody to a certain extent. Why are you drawn to jewellery as a form to express your ideas? I appreciate its wearability and mobility. Like no other art jewellery belongs to the means of self-expression, it reflects our personality and may be worn at the same time. Moreover, thanks to its size jewellery can follow you everywhere regardless of the place or destination, just put it in your pocket and start your journey! Do you picture someone wearing these brooches? If so, is it a man or a woman? Someone you know or a stranger? Yes, of course. The brooches with their fine handcraft and their deep, bright colors do carry esthetic values, they are nice to look at. They adorn the wearer in a very traditional sense. Having said that they are most suitable for someone who is able to find a meaning behind its symbolism. She or he also should be to a certain extend ready to face politically motivated comments or even discussions.

At the same time, a person, who embodies "Homo sovieticus"/"Homo digitalis" could also wear it and even be proud of it. I could imagine a bunch of homo sovieticus marching on the streets of Kyiv in support of communist ideas or manifesting against the liquidation of some communist monument. Such a usage would be an allusion to the range of communist pins worn in the USSR by diverse age groups united by common views and beliefs or St. George ribbon worn nowadays. In your statement you say that contemporary jewellery is often devoid of social meaning, can you explain that idea to me some more? Is it only missing in contemporary jewellery? Or is this something about jewellery itself - that it is sometimes just frivolous or luxury - not meaningful enough? Historically jewellery had been an important status marker identifying a wearer's place in the social hierarchy: it indicated if somebody was rich (f.e. amount or ore), married (f.e. a wedding ring), young (f.e. folk jewellery worn by maidens), if somebody lost a beloved one (f.e. mourning jewellery) etc.; the provenance, occupation and achievements were also manifested by jewellery. This "embeddedness" is somewhat lost in most of today's jewellery. I certainly do not want to reinstall something that has gone with a changing society, but rather explore this possible dimension of jewellery and expand it to new aspects of us living in social and historical contexts. I truly admire approaches and esthetics of modern artist jewellery, the democratization of production means and materials. Nevertheless, I am convinced that traditional techniques must be preserved while being adapted to current needs, social requirements, to reflect what we call Zeitgeist. 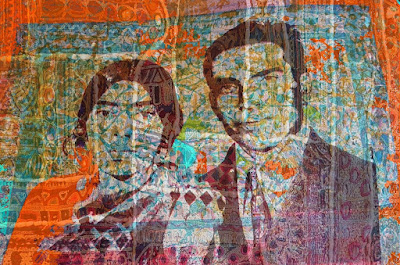